Technology has continued to accelerate, transforming our lives in remarkable ways. Medicine has
improved—many of the most significant disease threats have been wiped out. Life expectancies are rising.

While we feel the undeniable effects of climate change, the world has united and rallied to reach net-zero
emissions.

Historic investments in sustainable technologies brought this about. As they became more affluent,
nations around the globe began seriously addressing all causes of climate change.

One sector that has been
completely transformed is our food system. 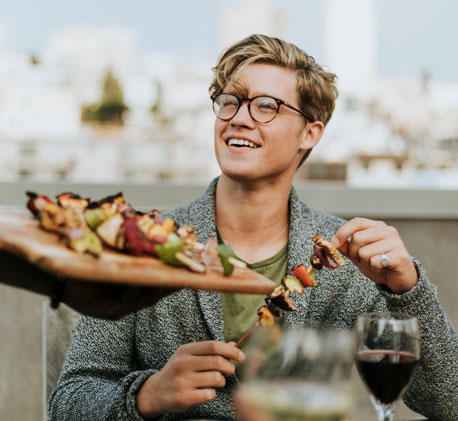 Industrial animal agriculture—which once represented 15 percent of greenhouse gas emissions and killed over 60 billion animals a year—has largely been replaced.

While small pockets of animals are still raised for food, the majority of food consumed by humans is now produced with plants, fungi, precision fermentation, microalgae, and cultivated cellular agriculture.

The vast unused agricultural land that once raised feed for livestock has been reclaimed, regenerated, and reforested.

We have hit peak carbon and peak animal meat. We have entered the drawdown era—a period of renewal.

This future is possible if we act today.